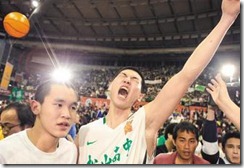 Li-chi HS, San-min HS, Tsai-shin HS and Nan-shan HS have all repeated as champions in the past 22 years, but no school was able to complete a three-peat until Song-shan did it. 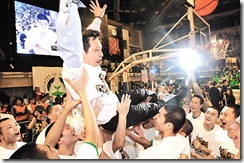 Arguably the best player in HBL this year, Hu had 29 points, 12 rebounds, five steals and three blocks in the title game after tallying 35 points and 13 boards in the semifinal game.

Hu, a 195cm lefty forward-center, was named the MVP with an average of 32 pints and 13.5 rebounds in two Final Four games.

"We have made history and this group of players deserve this honor. I'm proud of them, " Song-shan head coach Huang Wan-long said. Huang and Hu were both in tears in their long hugs after the final buzzer.

Song-shan, which has been known for its tenacious man-to-man defense, lived up to its nickname "the green shield" again in the second quarter, when it outscored Nan-shan 25-4 and jumped to a double-digit lead it never gave up.

Song-shan led 44-24 at the half and all Nan-shan could do was cut the deficit to 15 points, but Hu and Song-shan's outside shooters made several crucial plays to increase the lead to 20 points.

However, Chen had to graduate without a HBL title trophy in his hands. Nen-ren lost to Song-shan in the HBL Finals in 2009 and 2010 and failed to make the finals after the semifinal loss to Nan-shan Saturday night.

Chen, who suffered a minor concussion in the semifinal game, was determined to play in his final game despite doctors and coaches advised him against it. "I refused to sit on the bench in my final game, " Chen was quoted as saying.

With Chen controling the tempo, Nen-ren led by as many as 22 points as San-min never had a chance to mount a serious comeback run.

San-min, the only final four teams from southern Taiwan, was led by Wu Song-wei's 30 points. Center Shih Yen-tsung had 19 points and 15 rebounds. 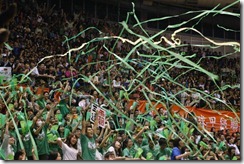