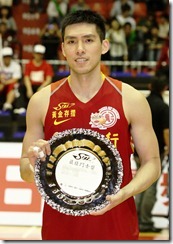 BOT guard Chen Shun-hsiang won the SBL Week 8 MVP with an average of 21.7 points and 7 rebounds after helping the team to its first three-game winning streak in five years.

Chen is having a breakout year this season, averaging 18.4 points and 5.2 rebounds. Chen gave credit to teammate John Vaudereuil, who joined the team in mid-season, for his solid inside play.

BOT players dominated the media poll with Chen going first with 24 points. Vaudereuil was second with 16 points while Hsu Chih-chang was third with 10 points.