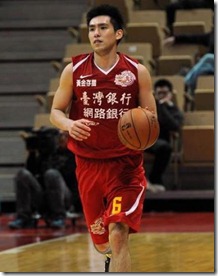 Bank of Taiwan shooting guard Chen Shun-hsiang came out of injury and turned in a pair of brilliant games this past week after the lunar new year break.

Chen made his season debut on Friday against Taiwan Beer after breaking his collar bone in a pre-season game and did not disappoint, chipping in 29 points, including five three-pointers, and lead BOT to a 90-80 win.

The 190cm sharp shooter followed with a 30-point outing in a 82-77 loss to Yulon yesterday. BOT import John Vaudreuil's two fatal turnovers cost his team the game. Yulon, which ranks third at 7-4, was led by Lu Cheng-ju's 26 and Chou Po-chen's 20.

Pure Youth, currently 7-3 at second place, was powered by Quincy Davis, who had 26 points and 17 boards, and veteran Chen Hsin-an, who had 11 points, six rebounds and seven assists, in a 92-84 victory over Taiwan Beer yesterday.

Taiwan Beer has dropped four straight, its longest losing streak in team history, despite Yang Ching-min and Emmanuel Jones are both playing well.

Yang had 42 points and Jones had 39 points and 20 rebounds in two games so far this week.

KKL's new import Anthony Fuqua tallied 14 points and 11 rebounds yesterday in his debut with the team, but KKL was routed by Taiwan Mobile 88-63. TM's Ryan Wright had 15 and 15 and point guard Su Yi-chieh had 17 points and seven assists.