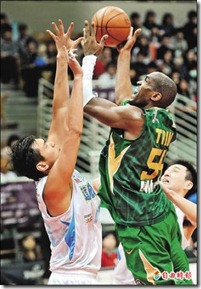 - SBL imports
Import players have been putting up impressive numbers this season. And Taiwan Beer finally settled with Kibwe Trim as its import after testing three or four guys since the start of the season.

According to the SBL regulation, import players could not be replaced after the deadline of Feb. 12.

The league raised the maximum height of import players from 6-7 to 6-9 this year, which I think was the primary reason the imports have been blocking more shots.

However, as I stated before, some people have started to question the true height of some imports, such as Elbert Fuqua and Kibwe Trim. They were both listed taller than 6-9 in the past.

- Taichung becomes PY's home city
The SBL is making another attempt at establishing a home court system, which has already been adopted by other countries for a long time.

Pure Youth Construction Group signed a contract with the central city of Taichung this week and from now on the team will be known as Taichung Pure Youth. It became the second SBL team to collaborate with a city this season after Yulon Luxgen signed a similar contract with New Taipei City, where the team's mother company Yulon Group is located.

Taiwanese basketball leagues and teams have failed many times before trying to adopt the home court system.

Due to the lack of qualified venues around the nation and lack of connection and identification with the teams due to the small size of the country, it has been difficult for local basketball fans to relate to specific teams.

However, Chinese Taipei Basketball Association (CTBA) President Ting Shou-chung insisted on giving another shot at the system, which he said would benefit the league and its teams in the long run.

- Week 7 MVP
Lu Cheng-ju of Yulon Luxgen was named Week 7 MVP after leading the team to a pair of victories with the average of 22 points in those games.

Lu came out of injury and help Yulon snap Pure Youth's 9-game winning streak during the week and the runner-up ranking with 11 wins and 5 losses.

Lu won the first weekly honor of his SBL career.

- Chang out of season
Dacin guard Chang Chih-feng tore the anterior cruciate ligament of his left knee and will be out of the season.

MRI report showed that Chang tore the ligament when he went up for a rebound and fell to the floor in the game against Taiwan Beer and it would require at least a year for post-surgery rehabilitation.

Dacin, which fell to third-place with 10-6 at the All-Star break, will need to find someone to replace Chang in the starting lineup and his 12.3 points per game.