He was recruited by Conrad Sun, who was hired as head basketball coach at SDCC in March. Sun briefly played for Taiwan NT back in the 80's.

Chung, a 19 years-old 194cm forward, obviously inherited the basketball gene of his father Chung Chi-mun, who coached in defunct pro league CBA and SBL (Videoland Hunters) before moving on as a businessman in China.

The elder Chung played for Taiwan national team before getting into coaching.

Chung Shou-nai was selected in the SBL Draft this year by Taiwan Mobile. However, according to SBL regulation, Chung is not allowed to play in the league before his senior year in college.

Before Chung, Jet Chang and Swing Chuang -- I don't know where those weird first name came from -- already got a taste at US college ball. Jet Chang is now a sophomore at BYU Hawaii, a NCAA Div-II school. Chuang is now playing for Fullerton College, a two-year junior college at California state system. 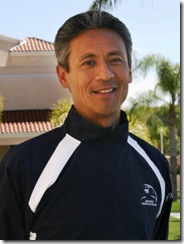