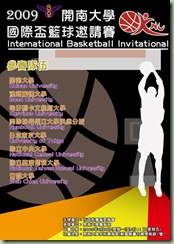 Eight teams from five countries will play in the forthcoming 2009 Kainan International Basketball Invitational tournament from June 8-11, which is organized by Taiwan's Kainan University, in Taoyuan County, Taiwan.

The tournament runs from June 8-11 with top two teams from Group A and B meet in a crossover semifinal before the championship game.

NTNU won the Div-I title of Taiwan's university league this year. 13 of 19 players on its roster play in Taiwan's pro league SBL and around 6 or 7 of them are starters. Among the notable players are 6-8 center Wu Tai-hao, who played in the U.S. NCAA Div-II BYU-Hawaii, Su Yi-chieh -- starting point guard of the SBL title team Dacin Tigers, Pure Youth forward Chien Chia-hong and Dacin starting SF Lin Yi-hui.

NTNU also has a junior varsity team. I'm not sure which team is in the tourney. My guess is it sent the A team. If it does, NTNU will be a tough team to beat.

Shih Chien Univ. finished as 6th place in the Div-II this year. I have no idea about the National Central University.