Kudos to my friend Bob Pierce

Pierce looking to build on successful first season with Lakestars

The Japan Times will be featuring periodic interviews with individuals in the bj-league — Japan's first professional basketball circuit — which wrapped up its fourth season in May. Head coach Bob Pierce of the Shiga Lakestars is the subject of this week's profile. Pierce guided the team to a 19-33 record as a first-year expansion team. 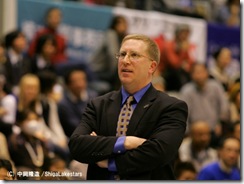 Fast facts: He has served as an assistant coach on the Japan national team and has been an assistant and head coach for the Hitachi Sunrockers of the JBL.

Looking back on the Lakestars' first season, what are your general thoughts on the team's performance? What went better than you expected? What didn't go as well as you'd hoped? And what happened basically the way you had thought it would?

During the regular season we beat every team at least once, so that was a sign that we could play and win against a variety of styles. But too often we played to the level of the competition.

We could play well and beat the best team (two wins against the Ryukyu Golden Kings), but kept losing to the worst team (five losses to Oita).

We didn't have a true go-to guy. Usually it was (forward) Ryan Rourke, but at times it was (center) Ray Schafer or (swingman) Bobby Nash. That often made winning close games much tougher.

I thought we had enough shooters, but we shot poorly from the 3-point line (30.1 percent) all season and from the free-throw line (62.5) as well.

And we need our Japanese players to score more. (Forward) Yosuke Machida had some good games, but never became the consistent scorer that we needed him to be.

So improving in those two areas will be a big key in the off season. But we had good team chemistry, great guys on and off the court, and I don't think I've ever enjoyed coaching a team as much.

Usually at the end of a long season there are some players you just can't stand anymore, but I looked forward to every practice, game and road trip with these guys.

Looking ahead to the upcoming draft and offseason moves, what do you feel are the team's biggest needs to address in terms of player personnel?

I think we need a power forward who is an elite rebounder, we need to add a really quick point guard, and then we need to find maybe one or two guys who are really good shooters/scorers as well as really good athletes.

Can you tell us what the team and individual players will be doing in the offseason to better prepare for the 2009-10 season? Will some of them compete for summer teams? If so, which teams?

I know Yosuke Machida and (point guard) Shinya Ogawa are going to spend a week in Hawaii, training and playing games at the University of Hawaii with Bobby Nash.

(Evessa) coach (Kensaku) Tennichi is inviting players to spend a week playing games in Osaka at the end of June, and we are encouraging all of our players to go if they are in Shiga at that time.

How would you rate the local coverage of the Lakestars on Shiga Prefecture TV stations, radio stations, Web sites, newspapers, etc.? What did you especially like and/or dislike in Year One coverage of the team?

I thought the coverage was pretty good. Eight to 10 of our Sunday home games were shown live on TV. The local TV station always showed game results and highlights on their broadcasts.

There were about four papers that would rotate and come in to interview me or players for stories about once a week.

I thought many of the individual features on players were really well done. But I disliked always being asked how I spent my private time or where I went in Shiga.

As a coach, how do you feel you changed by guiding a team in its inaugural year? Did it take a different approach than what you had faced in previous jobs?

The length of the season was the main challenge. There was the challenge of keeping enough things the same so that players would be relaxed, comfortable and confident in what they were doing.

But over the weeks and months I also had to keep presenting new drills, options on plays, etc. to keep things fresh and the players motivated.

College coaches often say the best thing about freshman is they become sophomores. I'm glad we won't be the new guys next year. Not having a history, a record of success to fall back on or derive strength from, is hard on a new team.

Earlier in the season, you commented on your dislike of the one-and-one free-throw rule in the bj-league. What other rule(s) or game policy(ies) do you feel the league ought to consider changing?

I don't really have too many complaints about the rules. The one-and-one rule rewards the defense too much for fouling, so I would like to see that changed.

I do like that the 3-point line will be extended, but that will make practices tougher as no gyms we use will have the new 3-point line.

I wish the league would limit the number of foreign players per team to four (with the current on-the-court-three rule).

Teams with five imports have more fouls to give, so the games get rougher. My biggest complaint is that the league doesn't really monitor salaries, player signings, etc.

The Hamamatsu Higashimikawa Phoenix probably violated the league salary cap by a huge margin, but no one in the league seemed to know exactly what they were spending, all the extras and bonuses they were supposedly giving, etc. At least they couldn't buy a championship their first season.

What is your favorite basketball movie of all time? Why?

It's not the best basketball movie, that probably would be "Hoosiers," but my favorite is the 1977 movie "One on One" starring Robbie Benson.

1) I liked that it showed some of the cheating and corruption in college basketball.

2) It is a typical American underdog, fight-against-the-odds story.

No one in my family was really into sports. I developed a love for basketball because of my neighbors and then because I went to basketball camp.

But my Dad knew I loved basketball, so he took me to see it, so that movie still has a very special meaning for me.

Has there been an article or book on basketball that has been quite influential in your development as a coach?

Dean Smith's "Basketball, Multiple Offense and Defense" taught me about the thought process, a systematic approach to try to cover all situations and to teach them clearly.

Every coach should own and read this book. I used his "freelance passing game" when I coached my first team of 9- and 10-year-olds. It's still one of the best ways to teach and learn the game.

I use very different offenses and defenses now, but still within the framework that Coach Smith set up.

"Foul" by David Wolff, the Connie Hawkins story. My favorite book of all time. I read it over and over. I just loved the whole world of basketball culture, good and bad.

And reading how Connie really grew and matured when he went overseas with the Globetrotters may be what steered me towards international basketball.

If you could add any player in the world to be LeBron James' right-hand man in Cleveland, his supplement superstar as Peter Vecsey has said, who would you pick? (Assume the role of GM in this case).

LeBron needs a big man who can run the pick-and-roll with him, pop out and hit shots, and also be a presence inside. I would love to see him with Tim Duncan or Chris Bosh.

Sadly that might happen in 2010 in New York, not in Cleveland.

Or he needs a versatile scorer on the opposite wing, someone like Kevin Durant, so whichever one you focus on, the other one beats you.

What occurrence in the bj-league over the past season was most stunning to you? Most impressive? Most predictable? (I'm thinking of games, statistics and individual or team efforts — examples of things that really caught your eye.)

When I talk to other coaches, they are all stunned that we couldn't beat Oita. I was rather stunned when Toyama had a fire sale and let Babacar (Camara) and (Rodney) Webb go.

Most impressive performance was Jeff Newton's 50-point game in the semifinals.

That the Hamamatsu Phoenix would go over the salary cap and try to "buy" a championship.