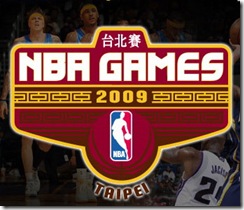 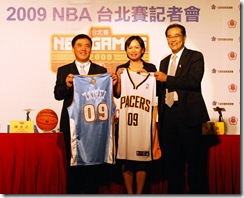 "October 8th will be an historic day for the NBA and for the millions of basketball fans in Taiwan," said NBA Greater China CEO Tim Chen. "Taiwan fans are very passionate about the game and we are honored to be able to present a matchup of these two great teams for them."

The game at the Taipei Arena, capacity 12,874, will showcase two talented teams and some of the NBA's best players. The Nuggets made it to the Western Conference finals this season and are led by two-time NBA All-Star Carmelo Anthony and the 2004 NBA Finals MVP Chauncey Billups. The Pacers are led by NBA All-Star Danny Granger who was the winner of the NBA's 2008-09 Most Improved Player award presented by Kia Motors and the fifth leading scorer in the league this season. The dance teams and mascots from both teams will be onsite to further provide an authentic NBA experience for fans.

As part of the league's commitment to social responsibility, NBA Cares will conduct community events in Taipei designed to positively impact the city and its youth. Since it began in 2005, NBA Cares has created 418 places where kids and families can live, learn or play in 20 countries across five continents.

"NBA fans in Taipei have been waiting a long time to see an NBA game in person and we are very excited to be hosting these two great teams in October," said Taipei Mayor, Mr. Hau Lung-bin. "Working together with the NBA, we plan to host an unforgettable event that will benefit our citizens and raise Taipei's profile as a premier destination for sporting events."

The game in Taipei is the fourth preseason game the NBA has announced that will be played outside the United States and Canada this October. NBA Europe Live presented by EA SPORTS will feature the Chicago Bulls and the Utah Jazz in London on Oct. 6 and the Jazz against the Euroleague's Real Madrid in Madrid on Oct. 8. NBA Mexico Game 2009 will feature the Phoenix Suns and the Philadelphia 76ers in Monterrey, Mexico on Oct. 18. To date, the NBA has staged a total of 93 games outside of the U.S. and Canada in 31 cities in 16 countries and territories.

The NBA, which opened its office in Taipei in 1997, continues to demonstrate its commitment to growing the game. During the 2008-09 season, three broadcast partners aired up to ten live games per week. In August 2008, former NBA Champions, Scottie Pippen, Clyde Drexler, Glen Rice and B.J. Armstrong teamed up with players from Taiwan's Super Basketball League to play two exhibition games as part of the NBA Legends Challenge. The league has organized dozens of other interactive fan events including NBA Madness, NBA Jam session and NBA 2-ball. 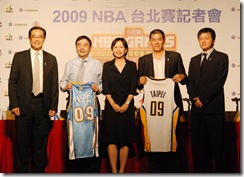