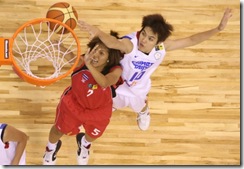 CHENNAI (23rd FIBA Asia Women Championship) - Chinese Taipei played the ‘Catch me if you can’ to almost perfection and Thailand fell short of catching Taipei in the crucial junctures of the pivotal Level I game on Tuesday.

Taipei, a semifinalist at the last edition at Incheon ensured there was no dent in the East Asian monopoly of the last four, winning the game 76-66.

“It was a lot tougher than what we expected,” said Chinese Taipei coach Lin Hung Ling-Yao.

“We also had to preserve the players for the semifinals,” she added.

“Our preparations coming into the championship, especially in terms of the conditioning of the players is not great,” Lin Hung said.

“There was no point in outstretching ourselves,” she added.

Taipei broke away from the equally sparring Thais early in the second half and never looked back.

Lin Hung used 11 of her players and 10 of them scored.

Liu Chun-yi led the scoring with 16 points, and seven rebounds.

Lan Jui-yu scored 11, nine of them in the second half, as the others shared the task of scoring equally.

Juthamas Jantakan scored a game-high 22 points, and collected seven rebounds, for Thailand but unfortunately in a losing cause.

In the semifinals on Wednedsay, Chinese Taipei will play against the Level I toppers, which will be known after the China-Korea game tonight.