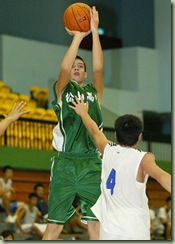 Imagine that you have a father who was at one point known as "one of the best forwards in Asia" and now you're playing high school ball. The comparison is inevitable.

That was what happened to 16-year-old Cheng Chih-kwan, whose father Cheng Chih-lung has been known as one of the best small forward in Asia and teamed with Yao Ming prior to Yao's NBA career in Shanghai Sharks.

Calling Cheng, who is currently coaching Taiwan Mobile in the SBL, "Taiwanese version of Michael Jordan" is no exaggeration. He led Taiwan to an all-time best runner-up finish in the 1986 Asian Junior Championship as a teenager and later starred in the now-defunct pro league CBA (Chinese Basketball Alliance, 1994-1999), leading Hung-kuo Elephants to three straight titles under American coach Paul Coughter during the second half of the 1990's.

Cheng Chih-kwan was featured in an article by the Central News Agency on Monday. The 185cm (visibly closer to 180cm) high school freshman was playing for defending HBL champion Song-shan High School in the Asian U-16 Championship trial, which will name U-16 NT after the trial tournament.

The junior Cheng looks like a young Cheng Chih-lung but is still raw. What kind of basketball will he be remains to be seen. Give the credit to the elder Cheng though. He put his son in good hands. Song-shan HS head coach Huang Wan-long was known for stressing fundamental, defense and the right attitude.