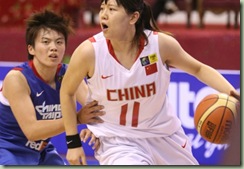 But that only hampered the champion outfit to take a little longer than normal to get into wonted rhythm.

Taipei, a semifinalist at Incheon two years ago, capitalized on that slow start and raced ahead 17-15 at the end of the first quarter.

But China, who meanwhile had found the means and the players to compensate for Guan Xin’s absence – caused by a upset stomach, from which she is unlikely to recover in time for the game against Korea tomorrow – came into their own in the second and there was no further problems.

China took control of the game early in the second quarter and grew in strength for an 82-54 win.

The win perched China on top of the leader-board along with Korea.

Chinese Taipei suffered their third loss in four games and will take on Thailand – who also have a similar record – in a virtual play-off for a place in the semifinals.

Ma Zhengyu scored seven of her team-high 13 points and Liu Dan six of her 10 in the second quarter to help China seize command.

Lan Jui-yu’s game-high 22 was the highest for Taipei, but 15 of them came in the first half.