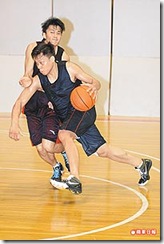 Taiwan Beer forward Lin Chih-chieh is back to Taiwan and will make a signing decision soon after tryouts with a pair of Chinese CBA teams.

Lin, who will be possibly the most high-profile Taiwanese player to play in China in years, participated in special tryouts with Shanghai Dongfang Sharks and Zhejiang Guangsha Lions in a four-day trip to China.

Saying that he was happy with his performance in the tryouts and very excited about the opportunity to play in China, Lin admitted that he was a little bit tired.

He hasn't made the final decision but said he prefers Zhejiang at the moment.

"The competition level is obviously different. Players are taller and it seems to me that more physical contacts are allowed here. There is more pounding, " he talked about Chinese style of play.

Taiwanese media reported that Shanghai team management loved what they saw, especially Lin's explosiveness. They would love to have Lin as the motor that keeps the Sharks, who finished next-to-last last season and was purchased by Yao Ming recently, running.

Lin had a tryout with Zhejing Thursday morning and did not disappoint. Zhejiang head coach Wang Fei even had a number of set plays designated for Lin in the two-hour practice.

Lin is expected to sign with either team for about US$10,000 per month plus incentives.