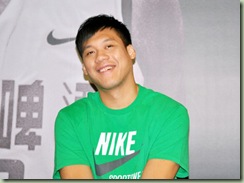 Taiwan Beer and Taiwan NT forward Lin Chih-chieh announces in a press conference Monday that he has signed with Zhejiang Lions despite a rumored more lucrative offer from Shanghai Sharks.

Details of the contract is not disclosed but it's believed to be a one-year deal that pays Lin more than $15,000 monthly.

The 27-year-old forward said that he chose Zhejiang, the 7th-place team in China's CBA last season, over Shanghai because he likes Zhejiang's players, competition level and experience.