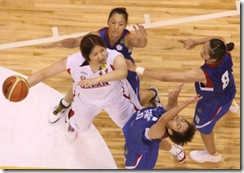 CHENNAI (23rd FIBA Asia Women Championship) - A powerful performance midway through the first half – interrupted only by the first quarter break – helped Japan outsmart Chinese Taipei 72-57 and retain their bronze on Thursday.

The Fumikazu Nakagawa-trained team from the Land of the Rising Sun thus bagged the third berth available to represent FIBA Asia in the 2010 FIBA World Championship for Women scheduled to be held in Czech Republic.

“We had our ups and downs in this Championship, but we have finished on an up,” gushed Nakagawa.

“A few plans and a few didn’t, but what I am happy about is that the plans for the most crucial game worked,” he added.

Taipei kept the exchanges – in plays as well as scoring – almost equal for a better part of the first quarter, but only till Japan found ways to cope with a surprisingly off-colour Yuko Oga.

Noriko Koiso and Ai Mitani stepped up to compensate for Oga’s struggle especially in the first quarter, when she drew a blank on all her six field attempts.

Mitani fired in five points – capping a steal to go with a crisp three-pointer – and assisted Asami Yoshida for a long-ranger and Japan broke away from an equal 8-8 position to close the first quarter 18-11 ahead.

Li Wan-ting’s free-throw and Chu Yung-hsu’s success on the paint saved the blushes for Taipei in that period.

And when the second quarter opened, Oga had found her touch.

The Phoenix Mercury point-guard scored four – apart from an assist and a steal – and Japan scored the first 10 points of the second quarter and consolidated their position.

Li Wan-ting ended the drought for Taipei, but Japan were well on cruise mode thereafter.

Koiso who had scored the first eight points for Japan before Mitani sparked the charge, went on to top score the game with 21 points.

“I know I’m not the best player in my team. Nor am I the star of the team. Therefore, it feels really good when you contribute at a time which matters the most,” said Koiso.

Mitani, who accounted for 16 points, echoed Koiso’s words: “We know we had lost the opportunity to qualify for the World Championship last time. So our target was very clear when we arrived here. And we were not going to let it go at the most crucial time.”

Oga had a sub-par 10 points, but had six assists.

Yoshida led the game for assists with nine and 11 rebounds, as Japan won the battle of boards 41-26.

Cheng Hui-yun’s 17 points was the highest for Taipei.