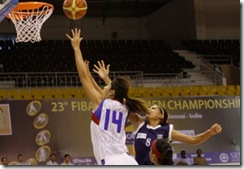 CHENNAI (23rd FIBA Asia Women Championship) - Chinese Taipei took almost the entire first quarter of their Friday’s Level I game against hosts India to grasp the pace and tempo of the game.

But once they did, towards the end of the first quarter when Lan Jui-yu scored on the paint to level the scores there was no stopping the 2005 FIBA Asia Women Championship bronze medalists.

Taipei won 84-61 to negate the loss they suffered against Japan on the opening night, leaving India with a bruising defeat for the second day running.

“It was too slow for us,” said Taipei coach Lin Hung Ling-Yao.

“We did take a little too long to get our tempo going. And fortunately it happened sooner than later,” she said.

In that time, Geethu Anna Jose did all the scoring after Prashanti Singh had opened the scoring for the game. And India effected a 10-0 run to move ahead 12-5.

Jose went on to account for more than half her team’s score – a tournament-high 34 points – but her effort was rather lonely, and therefore went in a losing cause.

Coming in for Lin Chi-wen with less than five minutes left in the first quarter, the 26-year-old reeled in nine of her 15 points of the game capping with that score-levelling attempt.

Chang Shih-chieh and Li Wan-ting, meanwhile found their bearings and Taipei didn’t have to worry too much.

Chang Shih-chieh scored eight of her 15 points and Li Wan-ting nine of her 14 for the game in the second quarter as Taipei left nothing to chance.

“Any win is a good win. And if it comes after a little struggle it means it has ironed out any problems in our approach,” Lin Hung said.

“But when you play such tough and experienced opponents, you don’t analyse on win or loss lines,” he added.