Foyle made his impact immediately felt 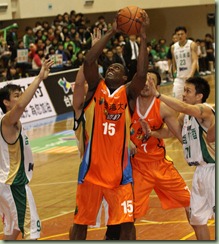 Alexus Foyle, who replaced Antonio Grant in Taiwan Mobile, made his impact immediately felt by leading the team to a three-game winning streak, averaging 26.7 points and 10 rebounds in three games.

Foyle had 17 of his game-high 37 points in the 4th quarter Sunday to go with 17 rebounds, leading Taiwan Mobile to a 93-89 win over Pure Youth, who has lost three straight.

Delvin Thomas exploded for 33 points and 14 rebounds in his last game with Taiwan Beer. Word is that Thomas planned to go back to the U.S. to be with his wife who's giving birth before he signed with TB.

The game also gave the SBL its first 2OT game this season. KKL's Chen Ching-huan made two threes in the last minute of the second overtime to secure the win.

The regular season schedule will be suspended for a two-week Lunar New Year break, Taiwan's biggest holiday of the year.