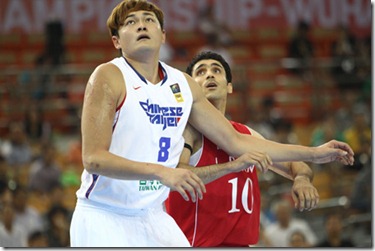 Much as it brought cheers to many of the fans who assembled at the Wuhan Sports Center, the 28-year-old’s classy performance must have also brought relief to Iran coach Veselin Matic for having the spearhead back in form.

“Ours is a team of 12 players. We just do what the coach asks us to do,” Bahrami who had an 18-point game high said.

Iran outscored Taipei 17-6 in the final quarter – marked by a 10-0 run that closed the game – and that in a nutshell spoke for the struggle of the twice defending champions to play with their customary elan.

“A lot of our players are coming back from injuries,” reasoned Matic.

“Also this is the first game of the Championship. It was like a shock treatment for us to get our act together fast enough,” he said.

“I think both teams struggled to get used to the new balls. Look at the shooting rate,” he said.

“We have set long goals. So every game is a step in that direction,” Matic said.

Matic’s opposite number Chou Chuan-san attributed it on Iran’s craftier players for the turn of the tide in the second half.

“We played to a plan and carried out what we had planned. But a team like Iran can always surprise you with something different. Which is what happened today, when they didn’t start the game with him,” Chou said pointing to the fact that Bahrami came off the bench.