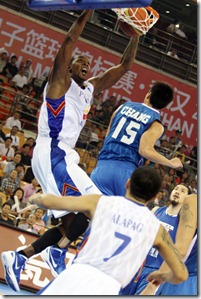 Philippine center Marcus Douthit was unstoppable. The naturalized center had 37 points and 10 rebounds as Philippines rallied in the second half to beat Taiwan 95-78 in the quarterfinal of the 2011 FIBA Asia Championship for Men and advanced to the semifinals.

Despite Taiwan coaching staff knew that Douthit would be the key man in the Philippines' offense and had reportedly designed special defensive plans to contain Douthit, the former NBA draft pick still dominated the paint, shooting 14-for-25 in the game. 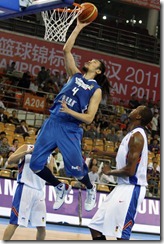 Taiwan played brilliantly for 15 minutes, leading by as many as nine points in the first half. It led by eight after backup forward James Mao's three-pointer with 4:40 left, but Philippines answered with a 14-3 run to close the first half leading by three.

Taiwan was out of synch in the second half as Philippines jumped to a 65-50 lead. It was hurt after point guard Lee Hsueh-lin was bloodied by an elbow of Joseph Casio and was forced to leave the game.

Taiwanese center Tseng Wen-ting fouled out of the game with 4:27 remaining. While Lu Cheng-ju made consecutive threes to pull within seven with three minutes left, it was too late.

Tseng led Taiwan with 20 points and five rebounds while Chen Hsin-an had 14. Lu scored 12 points and Lin Chih-chieh turned in 10 points, seven rebounds and five assists. Wu Tai-hao had 9 and 7.

Ranidel De Ocampo had 18 points for the Philippines. Masio Lassiter had 13 and 8.

Taiwan is scheduled to meet two-time defending champion Iran, which was shocked by Jordan in the quarterfinal, tomorrow but Lee Hsueh-lin would probably sit out the game for receiving stitches above his left eyebrow.

Several Taiwanese players were quoted as saying that they were not happy with the cheap shots thrown by some opposing players, but they also acknowledged that their poor play in the second half was why the Philippines had an opportunity for the comeback.