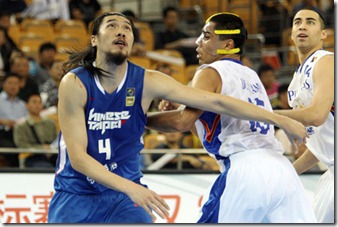 Some quotes taken from Taiwanese media is the past few days after the quarterfinal loss to the Philippines:

"It's a pity. This is the most important game and we had a chance to win, " center Tseng Wen-ting said, adding that Taiwan players failed to execute its defensive plan on Douthit's high post pick-and-roll.

Tseng said the communication between frontcourt players and guards was so bad that they ended up fouling the offensive players.

According to Tseng, Philippines executed its pick-and-roll and inside-outside games beautifully. Taiwan's defense fell apart when Casio's shot began to fall. The frontcourt guys had to go out to help, leaving Douthit uncovered inside.

"Our defensive plan did not adjust quick enough, " Tseng said.

It was never a happy thing to see your teammates get hit, said Chen Hsin-an.

"I was pretty mad at them. If Casio did not intentionally hit Lee [Hseuh-lin], I have to say that Asi Taulava's foul on Wu Tai-hao (grabbing) must have been intentional, " Chen said.

"Lee's injury was not why we lost this game, " said head coach Chou Jun-san. "Our play was out of synch before that. And we could not contain Douthit."

"We had a good first quarter. Unfortunately the backup players did not do their job, " Chou said, adding that the deciding factors were Douthit and Philippines' physical play.

Chou was not happy with his guards, saying that they were not offensive-minded throughout the tournament. The experiment of using Jet Chang as a point guard also failed.

Local media has also started to discuss whether Taiwan should, like other countries, to use naturalized players.

There has been similar discussion as well in China, according to local media. However, most Chinese players and basketball observers are against it.

For Taiwan, it would be difficult to find naturalized players for a number of reasons. First, I don't think there are many foreigners would like to receive Taiwanese passports or citizenship due to Taiwan's sensitive political relations with China.

Second, who is going to pay the bill? Some of the naturalized players -- if not all of them -- receive preferential treatment from the country he plays for. I don't think the CTBA would like to pick up those pay checks. The CTBA probably doesn't have enough budget.