Taiwan edges Lebanon 60-58 in second round 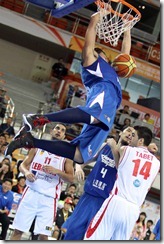 Two steals in the last 18 seconds saved the day for Taiwan NT, which edged Lebanon 60-58 in the second round of the 2011 FIBA Asia Championship for Men Monday in Wuhan, China.

In the chaotic last 60 seconds, Lebanon committed a 24-second violation while Taiwan returned the favor with a backcourt violation before Wu Tai-hao picked the pocket of a slashing Jean Abdel Nour to regain possession. 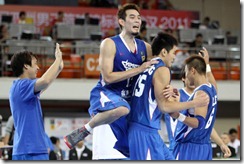 Jet Chang then missed four straight free-throws, giving Lebanon the final chance to go for a tie, before making up with a steal with two seconds left to seal the game.

Chen Hsin-an paced Taiwan with 15 points and Wu Tai-hao chipped in 12 points and 8 rebounds. Le Cheng-ju had 10 points, including a pair of crucial three-pointers.

Surprisingly, Taiwan played with patience in the game and attacked the paint the entire game, making only six attempts behind the three-point line. It still trailed in the rebounding department, 51-36, however.

Lebanon, which is going through a rebuilding phase, was led by Sanuel Hoskin's 19 points and 13 rebounds and Jean Abdel Nour's 12 and 9.

The game was a see-saw game throughout, with the score tied at 30 at the half and 50 in the end of the third period.

Taiwan pulled ahead 60-55 on Tseng Wen-ting's putback with 2:27 remaining. Rodrigue Akl answered with a jumper before Hoskin made one of two free-throws to cut the deficit to one basket.