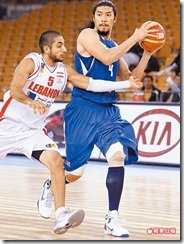 Terms of the agreement -- a three-year contract with Shanghai could exercise a team option for the fourth year -- were not disclosed, but it is believed that Tseng will be paid between one million to two million Chinese yuan annually.

The 6-8 center intended to sign with Shanghai after finishing his contract with Yulon Dinos in January but was kept from signing due to the CBA's internal regulations. Tseng signed with Osaka Evessa of Japan's BJ League instead, earning around US$10,000-15,000 per month.

It was reported that as many as six Chinese teams were trying to sign Tseng. Tseng chose Shanghai for his familiarity with the city.

The All-SBL center is scheduled to arrive in Shanghai on Oct. 16 for the pre-season training camp before the CBA season starts on Nov. 20.

As of now, five Taiwanese players, including four Taiwan NT starters, will play in China next season. Taiwan Beer forward Yang Ching-min, who was rumored to sign with Jilin, did not sign with any team and will play in Taiwan.