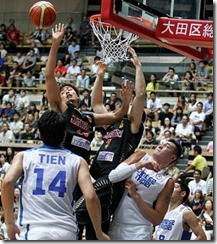 Taiwan NT beat India 113-88 on Sunday after suffering an opening setback against host Japan on Saturday and is now 1-1 after two games in the 2012 FIBA Asia Cup tournament in Tokyo, Japan.

However, Taiwan head coach Hsu Chin-tse was not impressed with Taiwan’s defense, which was also why the team dropped its opening game 90-78 to Japan.

J.R. Henderson led Japan with 19 points and 10 rebounds as host Japan led from start to finish on Saturday for a revenge of a 25-point loss against Taiwan in the Jones Cup tournament.

·         A FIBA Asia event for men returns to Japan after a gap of five years – the 24th FIBA  Asia Championship at Tokushima in 2007 being the previous occasions.

·         GCC powerhouse Qatar are the only team to have appeared in all the previous editions of this event – then known as FIBA Asia Stankovic Cup. Qatar were also the champions in its inaugural edition in 2004 at Chinese Taipei.

·         The 10 teams are drawn into two Groups of five each for the Preliminary Round.
·         Each team will play all the others in their respective Groups.
·         The top four from each Group will advance to the Quarterfinal play-offs