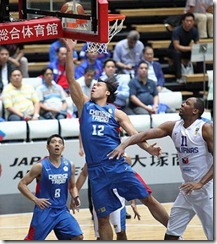 Taiwan lost to the Philippines 75-68 on Thursday in the quarterfinal game of the 2012 FIBA Asia Cup at Tokyo, Japan and will have to play in the classification round for 5-8 placings.

It is scheduled to meet Uzbekistan today.

Led by Marcus Douthit, who had 13 points and 11 rebounds at the half, the Philippines managed to maintain a small lead in the first three period, but Taiwan was not far behind thanks to Doug Creighton’s six three-pointers.

The Philippines opened the final period with a 7-0 run and led by as many as 14 points before Taiwan answered with a 9-0 spurt and cut the deficit to five points with 37 seconds left. However, two turnovers cost Taiwan the opportunity for a comeback win.

Taiwan NT head coach Hsu Chin-tse was disappointed at failing to make the semifinal round -- his pre-tournament goal -- but would shoulder the blame for his substitution errors.

Creighton led Taiwan with 21 points and Lin Chih-chieh had 12 points.

Douthit had 19 points and 18 rebounds.