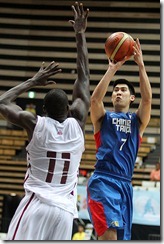 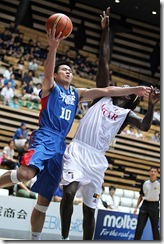 Tien Lei made a tie-breaking alley-oop dunk with 1.4 seconds left as Taiwan beat Qatar 75-73 in its last preliminary game on Tuesday in the 2012 FIBA Asia Cup tournament in Tokyo, Japan.

With 1.4 seconds left, Taiwan NT came out of a timeout and executed a near perfect set play by head coach Hsu Chin-tse for the surprising win.

Tien came off a backdoor screen by point guard Chen Shih-chieh, who missed both free-throws earlier and missed an opportunity to take a two-point lead, took off toward the basket and took an inbound pass from Lin Chih-chieh for the game-winning alley-oop dunk.

As insignificant as the game might be, Tien’s game-winner may go down as one of the best shots in the history of Taiwan NT.

Tien had 11 points and 9 rebounds while Chen Shih-chieh, who started the game for injured Lee Hsueh-lin, had 15 points, 6 rebounds and 5 assists.

With the win, Taiwan finished 2-2 in the preliminary round and ranked third in Group B. It will face the Philippines in the quarterfinal round on Thursday.

FIBA Asia reports as below:

TPE/QAT - BUZZER BEATER: Tien Li alley-loops Chinese Taipei past Qatar
TOKYO, Japan (4th FIBA Asia Cup): Tien Li produced a fantastic alley-loop to clinch a 75-73 win for Chinese Taipei that helped the East Asian team finish their Group B engagements on triumphant note, winding up the Prelim Round with a 2-2 record and the No 3 position in the group.

Taipei’s win thus finalized two of the quarterfinal match-ups as the 4th FIBA Asia Cup drew towards the play-offs.

Taipei will take on SEABA champions Philippines, who finished as the No 2 team in the quarterfinals on Thursday. Qatar will take on defending champions Lebanon, the top team of Group A.

“We put our big guy expecting that play. But he got drawn to the ball,” rued Qatar coach Tom Wisman at the end of the titillating battle of nerves, in which fortunes swayed like the proverbial pendulum.

Qatar had, moments earlier, floundered to go into lead with Erfan Saeed converting only one of the two free-throws after drawing a foul on Lin Chih-Chieh. That left the scores level at 73 with just about one second left on the clock.

Taipei coach Hsu Chin-Tse  called for a time-out, worked out his play, Lin Chih-Chieh looped the ball in from the sideline and with Qatar defense caught napping Tien Li dunked the ball to send the Taipei bench and supporters into raptures.

“I am thrilled it worked,” Tien Li, who had 11 points and 9 rebounds for the game, said.

And that moment literally was the only point of difference between the two evenly matched teams.

“It was a very close call and we didn’t want burn our players out,” said the Taipei coach.

Seasoned campaigner topped the scoring for the game with 17 points, 7 of them coming in the final period. Another veteran Wu Tai-ho had 15 points, 7 of them in the third quarter when Taipei found their rhythm.

Qatar got Trey Johnson, their naturalized player on the court for the first time, and the former LA Lakers guard returned a 15-point game with a 5/10 shooting in the field.

The ten (10) participating teams will be divided into two (2) groups (A and B) of five (5) teams each. Each team shall play all the other teams within its own group.