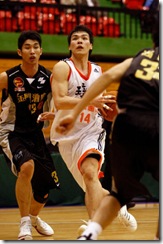 Taiwan Beer forward Lin Chih-chieh and Dacin guard Chang Chih-feng, SBL Finals MVPs in consecutive years, have pulled out of Taiwan NT for the East Asian qualifier due to severe sprained ankles during the Finals.

The qualifying tournament will tip off in Nagoya, Japan on June 10. Taiwan, along with Mongolia, South Korea, China, Japan and Hong Kong, will fight for two seeds for the Asian Championship.

Taiwan is scheduled to meet host Japan on June 10 and Mongolia on June 12 in the preliminaries.