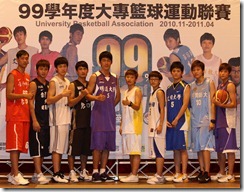 Sixteen teams will enter the men's division preliminary round, which will split the 16 teams into two eight-team group. Top three teams in each group advance to the quarterfinal while the 4th and 5th place teams vie for the remaining two seeds in the wildcard round.

Defending champion NTNU is still favored to win it all with its strong roster. The NTNU players include four active SBL players -- Chien Chia-hung of Pure Youth, Lo Yu-chun and Tsai Chun-ming of Dacin and Chang Jung-hsuan of Bank of Taiwan -- and promising underclassmen Sang Yi-ching, Chou Po-chen and Hung Kang-chiao.

These facts pretty much tell you how strong a team NTNU really is.

In the women's division, 12 teams will be split into two six-team group in the preliminaries with top three teams automatically going to the quarterfinal. The remaining teams will play in the wildcard round for two quarterfinal seeds.