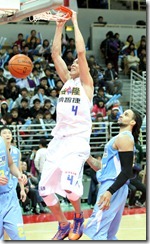 Yulon center Tseng Wen-ting was named over James Mao of Pure Youth as the Week 1 SBL MVP after averaging 16.5 points, 8.5 rebounds and an amazing 6.5 blocks per game during the week.

Tseng received 35 points in the media voting while Mao had 13 points.

The 204cm Tseng is mulling over a relocation to China to join Shanghai Sharks of the Chinese Basketball Association, but he proved to be an integral part of Yulon's offense and defense.

Given that Yulon was the only team in the league without an import, Tseng was always asked to defend opposing import players and did not disappoint.

It's still possible for him to sign with Shanghai after his contract with Yulon expires in mid-January. However, the chance was said to be slim because the CBA does not allow mid-season transfer for local players (Tseng was expected to play as a local).

Looks like Tseng will have to spend this season in Taiwan.