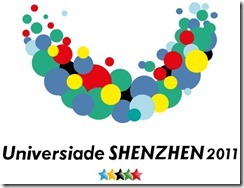 Well, OK, this is not new. It happened last week. But I didn't have time blogging. Taiwan women's NT lost to the US 101-66 in the gold medal game of the 2011 World University Game in Shenzhen, China. However, it was the best finish and the first medal ever for Taiwan in the games.

The medal is also Taiwan's first medal at major international competitions on any level, men or women.

Local media described the team that almost no one paid attention to as a Cinderella team after the team went past Finland, Lithuania and China in the preliminary round and beat Brazil in the quarterfinal and Sweden in the semifinal.

Taiwan was able to use its speed to counter taller opponents, but the team had no answers to the much taller Americans, who average 1.86 meter as a team, in the title game. Chang Ning, Taiwan's tallest player, is 1.86 meter tall.

Taiwan women's NT had eight appearances in the WUG before this year, finishing best in 2003 when it ranked fourth in Daegu, Korea.