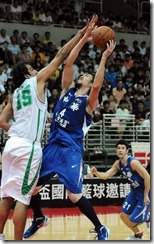 Taiwan head coach Chou Jun-san made the final cut right after the conclusion of the 2011 William Jones Cup with the 15-man roster for the upcoming FIBA Asia Championship for Men set, local newspaper Liberty Times reported.

Little-used point guard Hung Chih-shan of Pure Youth and young and inexperienced Chou Yi-hsiang were cut as well as Doug Creighton, who was reportedly unable to participate in the Asian Championship due to family business, the report quoted Chou as saying.

The 15-man roster is listed below.

Among the 15 players, center Tseng Wen-ting sat out the last two games of the Jones Cup to nurse his hip muscle strain while Wu Tai-hao was kept out of the entire tourney due to injury. Another key frontcourt player Tien Lei was not included in the 18-man roster also because of injury. As usual, Taiwan's height is expected to be a huge disadvantage in Wuhan, Hubei, China.