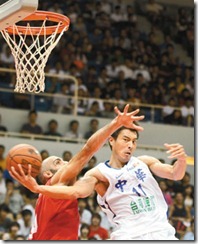 Chen Hsin-an to sign with PY?
Chen Hsin-an, 31, reportedly will return to Taiwan and sign with Pure Youth after spending the last two years in China with Dongguan.

Chen has finished his two-year contract with Dongguan, where his playing time was limited due to injury and other reasons. According to the United Daily News, Dacin Tigers is also trying to sign Chen, but Chen has not reached a final decision on his future, saying that he wants to focus on the upcoming FIBA Asia Championship for Men right now.

Yang was tested by Shanghai, which has signed Taiwanese center Tseng Wen-ting, in early July but decided to sign with Jilin, which offered better contract, the report said.

Yang Chin-min could sit out the FIBA Asia Championship for Men as his ill mother is scheduled for an operation.

Lee Hsueh-lin, who played last year in the CBA with Beijing, requested to leave the team temporarily to negotiate his contract with Beijing.

Point guard Chen Shih-nian was one of four players skipping the Thursday practice. Chen was in China to try out for a Chinese team and will join the team in Shanghai. Center Tseng Wen-ting was in hospital for a checkup of his hip injury.