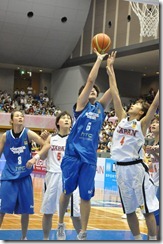 Taiwan women's NT lost to Japan on Sunday for the second straight time by a large margin in the same tournament after a 83-56 loss kicked them out of the podium finish in the 2011 FIBA Asia Championship for Women and the qualifying tournament of the 2012 London Olympics.

Losing to Japan by 27 in the preliminary round, Taiwan still couldn't keep up with the Japanese in the bronze medal game, scoring only 10 points in the first quarter and 9 in the second.

Japan led by an astonishing 55-19 at one point in the second quarter. Despite Chiang Feng-chun scored 16 in the final period, it was impossible for Taiwan to close the gap.

Chiang, who scored a team-high 24 points, said the entire team was too nervous to win the game. "We wanted to win this one so bad that we couldn't relax on the court."

Center Lin Chi-wen had nine points, but she was only 3 of 8 from the free-throw line.

Taiwan lost to Japan in the bronze medal game for the third consecutive time in the Asian Championship.

JPN/TPE - Yet another early Hayabusa flutter, this time it brings them the bronze

OMURA-NAGASAKI, Japan (24th FIBA Asia Championship for Women): Hosts Japan swamped their rivals with a familiar advance offensive early on in the game, further accelerated as the game progressed before settling into a cruise mode defeated Chinese Taipei 83-56  in the bronze medal play-off on Sunday.

A 9-0 run midway through the first quarter set the tone for the Japanese dominance.

Asami Yoshida and Yuko Oga, Japan’s two trusted spearheads struck once each with characteristic elan and Maki Takada (pic above) scored on the paint and completed a three-point play as Japan perched themselves firmly in the driving seat.

A seat they got down only at the final buzzer.

Takada scored 11 of her game-high 25 points for the game and Oga had 6 of her game’s 10 points and 2 of a game-high 6 assists in the first quarter.

“After the defeat last night (in the semifinals to China), the team was determined to prove we are not as bad,” said Oga.

“That determination combined with our rhythm helped us to a good start,” she said.

“I had a lot of dreams before this tournament. I was really determined to take the team to the Olympics. It was heartbreaking when we lost last night. But I think we more than made up for that with today’s performance,” said Takada.

“Our shooting let us down,” said Taipei coach Chang Hui-Yin.

“The point about Japan tonight was they as aggressive in their defense as in their offense. We were truly caught off guard,” she said. 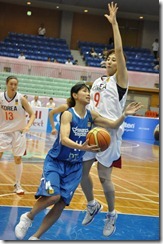 On Saturday, Taiwan lost 72-66 to Korea in the semifinal game after committing 16 turnovers and missing a couple of shots that could have cut the deficit in the closing minutes.

Of course, Taipei proved – as Korea coach Lim Dal Shik had expected – as tough a nut to crack and it was Ha’s 202-cm presence right in the center of the Korean plans that made all the difference.

Taipei almost matched Korea point for point and basket for basket – but all only when Ha was benched.

Ha played only 18 minutes, but logged in a dozen points in that time to leave Taipei high and dry literally.

“She’s very effective when used like this,” Lim Dal Shik said of using Ha in parts.

Sin Jung Ja and Kim Jung Eun, who along with Ha are the only three members in the current team, who were also a part of the gold winning Korean team at the 22nd FIBA Asia Championship for Women at Incheon in 2007, did the rest of the damage for Korea.

Sin scored 15 points and collected 8 rebounds and Kim accounted for 13 points and 7 rebounds.

“We did alright. Let’s get back to our boards where we lost out,” rued Taipei coach Chang Hui-Yin.

Chiang Feng-chun and Liu Chun-yi shared the scoring honors for Taipei with 15 points each. 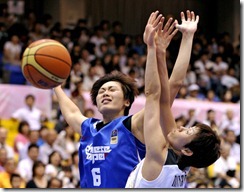 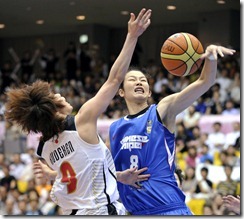 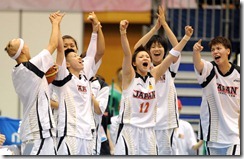 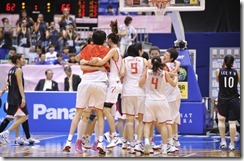 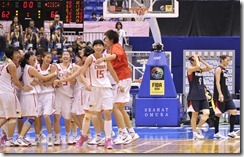