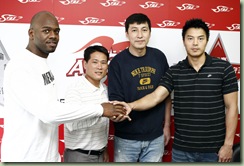 The replacement meant that Taiwan Beer will have four players start for the Red Team in the annual mid-season All-Star Game, which will be played in Jhubei City, Hsinchu County on February 28.