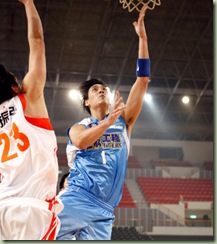 Sixth-ranked KKL led 88-76 with 2:30 to go before Yulon made the last rally. Yulon's consecutive threes plus three missed free-throws from KKL made the game interesting again in the final minute. However, Yulon could not pull ahead.

Yulon, which was replaced by Dacin at the top of the standing after the loss, was led by Chou Shih-yuan's 25 points. Center Tseng Wen-ting had 16 and 8.

Dacin 89-80 PY
Tien Lei had 18 points and 10 rebounds, leading Dacin to its eighth win of the season with an 89-80 win over Pure Youth Saturday.

Dacin led 49-42 at the intermission with a 11-4 closing run and added a 16-2 run in the third quarter to lead by more than 20. PY cut the deficit down to single-digit in the final period but Dacin, led by Byron Allen, quickly put the game away.

Chang Chih-feng had 21 points and 6 steals. Byron Allen, who is leading the league in rebounding, turned in 13 points and 10 rebounds. Lin Tsun-ching led Pure Youth with 19 points and Chen Shih-chieh had 12 points, 10 rebounds and 7 assists.

TB 77-72 TM
Taiwan Beer and Taiwan Mobile met again Saturday after the scuffle which resulted in a unprecedented 9-man suspension last week. TB got a revenge this time with a 77-72 win, taking advantage of the absence of suspended TM import Mario Boggan and injured Ouyang Ching-heng.

With the score tied at 69 all with less than three minutes to go, TB closed out the game with a 8-3 run. The defending champ won on consecutive nights with poise and have won four straight. Last night, TB beat BOT on Hsu Hao-cheng's game-clinching three with 0.3 seconds left.