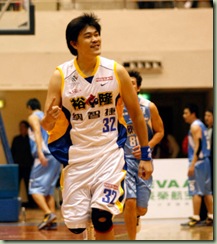 Veteran backup center Wu Chih-wei made all five of his shots in 10 minutes and scored 13 points, including seven in the last 3:07, as Yulon snapped Dacin's 4-game winning streak with a 83-71 win.

Luxgen head coach Chang Hsueh-lei had no choice but went to Wu after starting center Tseng Wen-ting fouled out with less than five minutes left in the game. Wu had a three-point play with 1:06 to go to boost Yulon's lead to 11 points and ensured the victory.

Yulon was again without the service of top scorer Chen Hsin-an, who was out with a knee injury. Chen Chih-chung led the team with 17 points, 7 rebounds, 5 assists and three steals.

Chang had nothing but sweet words for Wu after the game, saying that it was not easy for a sub to step in and make plays with the game on the line. Dacin import Byron Allen, who gave Tseng Wen-ting trouble all night long, was not able to contain Wu in the end.

Su Yi-chieh, SBL rookie of the year three year ago, finally returned to action Friday night after sitting out most of the last two season with injuries in his left elbow and right wrist. The talented point guard had eight points and three steals in 18 minutes.

In the other game, KKL edged Taiwan Mobile 95-94 for its second win of the season.