TB beat Dacin in OT, Yulon back on top 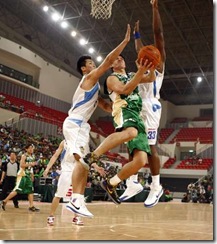 Taiwan Beer beat Dacin 86-83 in overtime and Yulon routed Taiwan Mobile 77-55 Sunday as Yulon unseat the Tigers and become the new No. 1. Yulon, 6-1, led Dacin by a half game and TB climbed back to number three with 4-3.

Led by Lin Chih-chieh and Yang Ching-min, TB overcame a 35-point outburst from Dacin's Chang Chih-fung for the much-needed win as Lin and Yang each chipped in 20 points. Lin also pulled down 13 rebounds.

Byron Allen made a pair of free-throws and helped Dacin pulled ahead by one with 14.3 seconds left in regulation. Allen was whistled for a unsportsmanlike foul on the following possession. However, TB managed to convert only one point from two free-throws and a possession as the game went into over time.

Both side could not make a run to put the game away in the extra session. Seldom-used TB forward Hsu Cheng-wen became a unlikely hero, making three of four foul shots before Yang Ching-min iced the game with a fastbreak layup.