Story on Jet Chang from Hawaii

Also found this mid-January article on Jet Chang in a Hawaiian publication Midweek.com. Taiwan Hoops was also mentioned in the story.

A High-flying Jet Lands In Laie

Don’t look now, but there’s a jet stream flying through Laie these days.

“What a flier,” hollers Hui Wei of Taiwan.

“Cute!” is the response from Wendy Zhu of Shanghai. 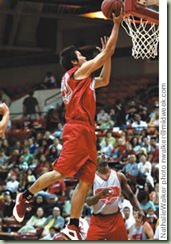 They’re all international students at BYU-Hawaii, and they’ve helped form the unofficial - and quite large - rooting section for the Seasiders’ freshman basketball sensation Tsung-Hsien “Jet” Chang of Yilan, Taiwan.

“I appreciate the cheering section. It’s nice,” Jet says humbly, lowering his head as if he’s slightly embarrassed by all the attention he’s been receiving on campus.

But the praise bestowed on the 6-foot-3-inch shooting guard doesn’t just come from the bleacher seats. Taiwan Hoops,a publication in his home country, calls Jet “one of the most physically gifted athletes” the island formerly known as Formosa has ever produced. It was the basketball fans of his homeland who gave him his nickname.

“With the way he jumps, they thought he soared like a jet,” reports BYU-Hawaii sports information director Scott Lowe. Veteran Seasider head coach Ken Wagner also glows when he talks about his freshman star.

“We knew Jet was a great player in the open court,” Wagner says. “What we didn’t realize was what a great defender he is. As we move along in the season, he’s going to be playing more and more.”

Jet currently has a reserve role for the nationally ranked Seasiders, but even off the bench he’s been sensational. He’s scored in double figures several times this season, including a game-high 19-point outburst on 6-of-7 shooting in a victory over Midwest powerhouse Drury.

It’s easy to see how Jet got his name. He literally explodes in the open court, as if propelled by some extra-special jet fuel. He elevates on his slashing drives to the basket, and he has what other players like to idolize - hang time.

“I went to the LeBron James Camp (in Ohio),” he says. He even wears LeBron’s No. 23. From watching Jet play, you can actually see similarities, despite the fact that he’s several inches shorter than the Cleveland Cavaliers’ all-star. Perhaps it’s unfair to compare a freshman reserve to an NBAmegastar, but anybody who has seen the Taiwanese sensation play can tell you he’s got that special something to his game that can practically take your breath away.

Jet’s biggest challenge was learning English. Several big-name colleges, including Cal-Berkeley, made recruiting queries, but Jet’s inability to speak the language initially kept others away. He learned about BYU-Hawaii from another Taiwanese player, Wu Tai-hao, who was an all-PacWest forward for the Seasiders a few years ago.

“He had to learn some English (before he could get into school),” Coach Wagner says, “and he did.”

Working with his BYU-Hawaii teachers and getting help from teammates and other students, Jet is doing his best with the language barriers. “I study with my teachers one-on-one,” he says. “My English is getting better.”

Meanwhile, his game is improving by leaps and bounds.

“It’s been exciting,” Jet says. “My teammates are very nice.”

So is the Jet Chang cheering section, growing in numbers each and every time the high-flying Seasider guard takes the court. Watch him fly!

The story wrote about Jet Chang, a Taiwanese player who currently plays for BYU-Hawaii Seasiders. Fans here hope Chang follows the footsteps of Wu Tai-hao and enjoy a good career at BYUH and maybe try to challenge the ultimate level -- the NBA.