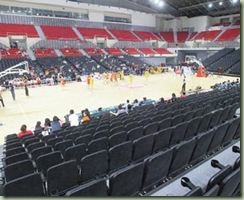 It was even one short of 200. CTBA said the attendance record Friday at Jhubei, Hsinchu County was 199. That's right. Only 199 people were at the Friday games of SBL, which claims itself the most popular basketball league in Taiwan.

Couldn't argue with that. After all, the SBL is the only basketball league in town.

The attendance number failed to reach 100 until some point during the first game. The lowest attandance record for a SBL game is 76, which was set February 29 last year.

Two things to note though. Fridays games traditionally received less fanfare and lower TV rating. And students are back in school after the winter break for the new semester already.

Capacity of Jhubei Stadium is 8,000. The low attendance may further convinced the SBL people that the games should not be organized outside of Taipei area. However, I always think that the league should set up more games at mid-sized cities around the country instead of just staying in Taipei area. If my memory is correct, attendance records were always pretty good when the games were played in Hsinchu, Taichung, Kaohsiung or Tainan.

The true reason why teams and the league has been reluctant to go "down south" is the traveling fee. And when they do take the games out of Taipei, they either picked a wrong city or neglect the transportation factor for fans. Take Jhubei for example, it is not convenient for fans who don't drive to get to the arena.

Anyway, this is not the first time the attendance record was down to an alarming level. Many years ago when I covered a game of the defunct pro league CBA in Keelung, the game was so quiet that I could hear the typing sound on my laptop. I believe there were less than 100 fans at the game.

The only good news is the SBL games are back on air. ESPN Taiwan will start its broadcast today.