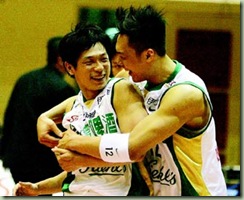 Yang Ching-min, who had 33 points, scored in the paint with 8.6 seconds to go as TB went ahead by two. BOT took the lead again on forward Chen Shun-hsiang's 3-point basket with 6 seconds left. After the timeout, Yang passed the ball out of a double-team to Hsu Hao-cheng, who took the winning shot.

"Coach Chou (Jun-san) wanted us to take the ball to the basket and go for a foul, and it was either Lin Chih-chieh or Yang Ching-min was supposed to take the last shot. I was probably the sixth offensive option, " Hsu said jokingly in the postgame interview.

TB head coach Yen Chia-hua returned to the court after serving a two-game suspension. Speaking to the media after the game, Yen said, "I will probably lock myself up again if we lose this one." He also gave credit to his opponents, saying that BOT played a great game and it was unfortunate TB had to spoil Chou Ben-tang's best game.

Chou Ben-tang, who was BOT's starting center but lost the position since, made all seven of his shot attempts and scored 19 points.