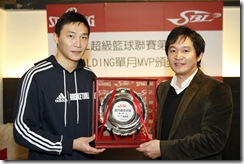 Dacin guard/forward Chang Chih-fung was named January Most Valuable Player Friday for his consistent performance which helped Dacin to open the season 4-0.

Chang, who averaged 21 points, 6.8 points and three assists in January, said that he felt like this year he was in the best condition in his career. Being injury-free has been a plus, he told the media.