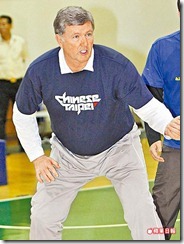 Wagner, who led BYUH to the NCAA Div-II men's championship game this year, was brought in by NIKE Taiwan to coach in its Taiwan summer camp and help train Taiwan's U19 NT, which is going to Latvia for the FIBA U19 World Championship.

The veteran coach and his assistant John Wardenburg also took time to visit Taiwan's senior NT, which is in camp to prepare for the East Asian Basketball Championship -- a qualifier for the Asian Championship. He was scheduled to help train Taiwan NT for four days.

Wagner was familiar with Taiwanese players, having coached Taiwan NT center Wu Tai-hao for two years and junior Jet Chang, who was named Most Outstanding Player in this year's Div-II tourney, for three years.

Meanwhile, Taiwan U19 NT will go to China for a week-long tour from June 3 to June 10, during which it will meet junior teams of the Chinese league CBA and other teams, according to head coach Huang Wan-lung.

Huang said the team had to give up the planned trip to South Korea because of schedule problem. Kyung Hee University basketball team won't be able to help with the training camp before mid June, Huang said, and that will be too late for the World Championship, which starts June 30 in Latvia.

Taiwan U19 NT will be the shortest team among 16 participants in Latvia, said Huang, who has been known for his style of high intensity and tough man-to-man defense. The players will have to have stamina that could last two games under his style of play.

"So far, these kids are only 60 percent of what I expected, " he was quoted as saying.

"However, we have been working extremely hard. And these kids deserved everyone's blessing. After all, we're going to meet the top 16 teams in the world as Asia's third seed, " he said.