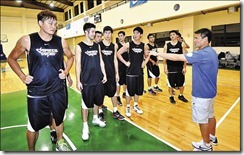 Chen Tse-wei became the latest casualty down with injury as the 200cm Dacin forward withdrew from the national team training camp for the 2011 EABC, according to head coach Chou Jun-san.
So far, Chen, Tien Lei and Chang Chih-feng -- coincidentally, all three came from Dacin, have decided to sit out the EABC.
Tseng Wen-ting, who's currently playing in the BJ League of Japan, has said he would like to sit out the EABC before joining the NT in Wuhan, if the team makes the Asian Championship.
Other injured players included Wu Tai-hao, Chen Shih-nian and Ho Shou-cheng. All three are still currently in the camp.