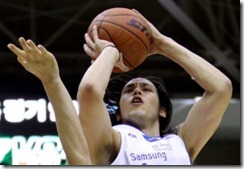 According to FIBA Asia, South Korea has announced its 12-man roster for the EABC. Since South Korea should have no problem finishing among the top three besides China, I don't think the roster is that important.

The situation in the EABC is clear, unless Mongolia and Hong Kong pull off major upsets in the tournament, Taiwan, South Korea and Japan are expected to win the three seeds for the 2011 FIBA Asia Championship in Wuhan, China.

With the offense handicapped by the absence of KBL Finals MVP Ha Seung-jin and seasoned campaigner Kim Joo-Sung, Korea head coach Hur Jae opted to go with Eric Sandrin to shore up his inside play.

Also, the emphasis on the team selection has been on youngsters with KBL Rookie of the Year Park Chan-Hee leading the pack. Oh Se-Keun and Kim Sun-Hyung, who are yet to cut their teeth in the professional ranks too, have made the cut.

“We should have patriotism to compete with other countries. Whoever plays in the game, they have to burn with passion. We lost some good players like Ha and Kim. But we would get younger and play faster. Our goal is getting a ticket to the Olympic 2012 in London,” Hur was quoted as saying in the Korean press.

The 26th FIBA Asia Championship is also a qualifying event for the 2012 London Olympics.

The champion team from Wuhan will qualify directly, while teams placed second and third will qualify for the FIBA Olympic qualifying tournament.

The following story taken off from FIBA Asia was based on my previous story.

Chinese Taipei will participate in the East Asian qualifying tournament at Nanjing (China) in mid-June in an attempt to make it to the 26th FIBA Asia Championship at Wuhan (China).

With China already qualified for the tournament as hosts, three places are up for grabs from the Nanjing bash.

Chinese Taipei's 24-man roster includes six overseas players, including a trio playing in China, Tseng Wen-ting, who is playing for BJ League's Osaka Evessa in Japan, and the pair of Jet Chang and Chou Yi-hsiang who play in the US collegiate ranks.

He scoring 78 points in the two Final Four games and became the first Taipei player to be named the Most Outstanding Player in Division II Final Four.

Chou, a 6-4 freshman at Salt Lake Community College, averaged 4.6 points in 15.1 minutes in his first season.

Chinese Taipei will be coached by Chou Jun-san, an assistant coach of the Taipei SBL champions Taiwan Beer.