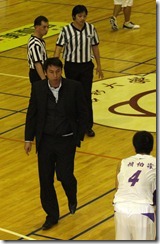 Chia, a 2001 class of Pittsburgh State (Kansas) University with a PE degree, will replace Cheng Chih-lung, who stepped down after failing to take Taiwan Mobile to the SBL playoffs in four years. Cheng left the team with a won-loss record of 44-76.

Chia, who reportedly will sign a three-year deal with the SBL team, is considered one of the top young coaches in Taiwan after leading Nan-shan High School to HBL titles in 2008 and 2009. He also transformed Min Dao University from a Div-II team into a Div-I powerhouse, making the final four last year and the championship game this year.

Cheng, an Asian All-Star forward in his prime, has been criticized for the lack of offensive strategy during his tenure with the team. Under Cheng, Taiwan Mobile has been a team which stresses half-court set and defense and prefers a slower pace.