Taiwan U19 NT departs for Latvia 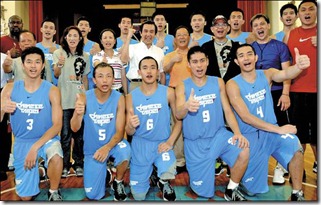 Taiwan U19 national team departed for Latvia Sunday for the FIBA U19 World Championship for Men, hoping that they will pull off another miracle.

Taiwan is scheduled to meet host Latvia at 1:30a.m. July 1 Taiwan Time. Less than 17 hours later, they will meet Argentina at 9p.m. July 2 (Taiwan Time) before finishing the preliminary round against Australia at 9a.m. the next day.

The smallest team in the 16-team field of the tournament, Taiwan hopes that it will duplicate the inspiring upset victory over Lebanon in the Asian U18 Championship last year. Taiwan overcame a 15-point deficit to defeat a taller Lebanese team.

Taiwan, which makes the FIBA U19 World Championship for the first time in 24 years, has an average height of 189cm.

Chien Chao-yi, a 181cm guard, said he was well aware that most opponents in Latvia he has to defend are probably as tall as 194cm forward Hu Lung-mao, Taiwan's top scorer and rebounder, and those opponents could have five starters taller than 6-7 on the court, but all he has to do is to do the best he can -- without fear -- when he's on the court.

Taiwan head coach Huang Wan-long, who led Song-shan High School to a unprecedented three-peat in Taiwan's high school league HBL between 2009 and 2011, said that a smaller team will have to disrupt its opponents' tempo in order to win the game.

"In other words, we have to deny the ball at all time and limit open shot opportunity of our opponents. That's how we beat Lebanon, " he said.

"I don't have a concrete goal in mind. I have to to prepare these kids and train them to reach the top condition. Come game time, the only goal I have for them is to play their hearts out."

Most basketball observers predicted that it will be very difficult for Taiwan to get a win in the preliminary round.

Last year, Huang added, "no one expected us to make the World Championship but we did. This year we have to do it again. We have to make a miracle happen one more time."