Yang could join Tseng in Shanghai next season: report 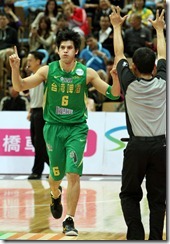 The 190cm shooter is expected to be tested in Shanghai in July and meet with Shanghai owner Yao Ming and its head coach Bob Donewald, United Evening Daily reported, adding that two other teams expressed interests in Yang.

Tseng, a 204cm center who played for Osaka Evessa of the Japanese league BJ League this past season, is expected to sign with the Sharks soon. Due to league regulation, Tseng was not able to join Shanghai last season.

Yang will be yet another Taiwanese star player to play for a much lucrative contract, following the footsteps of Chen Hsin-an, Lin Chih-chieh, Lee Hsueh-lin and Yen Hsin-shu, among others.

While top players usually earn more than that with some getting paid more than NT$3 million (around US$105,000) because most SBL teams did not follow the stupid regulation, the budgets of SBL teams pale in comparison of the Chinese teams.

Some local basketball observers have urged the league to scrap the salary cap and called for the SBL teams to invest more on the players, otherwise, they said, losing big-name players will be inevitable.