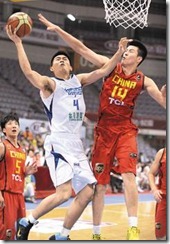 Taiwan was routed by China 87-53 in its last game in 2011 East Asian Basketball Championship Wednesday in Nanjing, China and finished fourth in the qualifying event for the 2011 FIBA Asia Championship for Men.

Taiwan head coach Chou Jun-san, who made his debut as head coach of the national team, said the second-unit players actually outplayed the starters, who only turned in average performance, in the tourney.

Chien Chia-hung, a 197cm forward from Pure Youth, was a pleasant surprise, averaging a team-leading 14.25 points in four games. Chien scored a team-high 19 points Wednesday and, according to local media, Chinese teams have expressed interests in signing the 24-year-old. 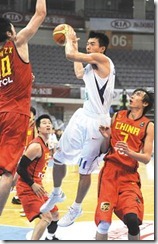 Facing the Chinese B-team, Taiwan trailed 34-26 at the half before a disastrous third quarter changed the momentum of the game. China outscored Taiwan 30-11 in the period as guard Meng Duo, who finished with 22 points, made four three-pointers. Taiwan couldn't find the solution against seven-footer Zhang Zhaoxu, who tallied 12 points and 13 rebounds, either.

Taiwan technical advisor Bob Hill reminded his players to "hold their heads up" later in the lock room, saying that it was only a qualifying tournament and there was no need to lose confidence because of one game.

Taiwan NT is scheduled to return to Taiwan Thursday and will soon be in preparation of the William Jones Cup tournament, which will tip off on August 6. The annual international invitational tourney will be used by many teams as a warm-up competition for the Asian Championship in September.

Chou said that he is most concerned with the rebounding issue for now since Taiwan was outrebounded in almost every game in Nanjing. It's almost guaranteed that Chou will make some changes with the lineup between the Jones Cup and the Asian Championship.

With the absence of Tien Lei, Lin Chih-chieh and several oversea players, including Tseng Wen-ting, Jet Chang and Chou Yi-hsiang, the Taiwan NT in Nanjing was actually a B-team. It will be interesting to see how Chou and Hill could make the team better once everyone is back in the lineup.