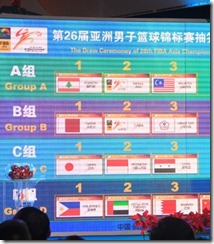 Taiwan was placed in the tough group B with two-time defending champion Iran, Gulf power Qatar and a Middle Asia team which could be Kazakhstan after FIBA Asia completed the draw for the 2011 FIBA Asia Championship.

CHN/IRI - Iran to begin title defense in Group B; China opt for Gr. D; Lebanon in Gr. A

The draw for the 26th FIBA Asia Championship was completed at the host city Wuhan amidst a sparkling ceremony on the Yangzte River on Wednesday.

The 26th FIBA Asia Championship, also the qualifying event for the 2012 London Olympics, will be held from Sept 15-25.

The 26th FIBA Asia Championship, also the qualifying event for the 2012 London Olympics, will be held from Sept 15-25.

The champion team from Wuhan will directly qualify for the most significant sporting event at the British capital, while the No 2 and No 3 teams will qualify for the FIBA Olympic qualifying tournament.

Hosts China as per the procedure of the draw opted to play in Group D after SEABA champions Philippines along with GCC duo UAE and Bahrain were drawn.

Lebanon, who qualified for the 26th FIBA Asia Championship directly by virtue of winning the title in the 3rd FIBA Asia Stankovic Cup last year were drawn in Group A along with the qualifier from the SAARC division of Middle Asia, SEABA’s Malaysia and recently crowned East Asian champions Korea.

Japan, who lost to Lebanon in the 3rd FIBA Asia Stankovic Cup, were drawn into Group C along with SEABA runners-up Indonesia, 2009 FIBA Asia Championship bronze medalists Jordan and another WABA team Syria.

The 26th FIBA Asia Championship is the fifth occasion when China will host this prestigious event – 1989 Beijing, 2001 Shanghai, 2003 Harbin and 2009 Tianjin are the earlier occasions.

The four semifinalists of the 3rd FIBA Asia Stankovic Cup – Lebanon, Japan, Qatar and Philippines – were seeded into four different groups, and the draw decided which group each of them will figure. Liu Guiyi conducted the draw for the seeded teams.

The two Middle Asian representatives along with Indonesia and UAE were drawn next. Hu Dechun drew the lots to decide which team goes where.

Luo Changgang conducted the draw for the next level involving Malaysia, Taipei, Syria and Bahrain to follow suit.

At this stage, China exercised their right – as hosts – of choice in the groupings and Zhang Jin drew Iran, Jordan and Korea into their respective groups.

The top three teams from each group will advance to the Second Round in the following manner.

Each team will play the three (3) new teams in its own group (the final scores of all games played in the Preliminary Round are valid for this round). The top four from each group in the Second Round will advance to the knockout quarterfinal stage.