Breaking news: Yulon walks out of game after controversial call 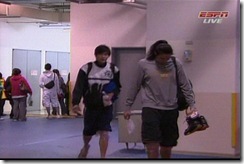 This just in. The whole Yulon Luxgen team stormed out of the arena about 10 minutes ago after a controversial call. CTBA announced that the game result will be forfeited and ruled a 20-0 Dacin win.

With 19.6 seconds left and Dacin leading 74-71, Yulon center Tseng Wen-ting was whistled for an offensive foul while it was quite obvious should have been a Dacin foul. Yulon head coach Zhang Xue-lei was furious and led the team out of the building after his protest had failed.

The walkout could ignite many issues in the aftermath. Did the box score of this game count? Will Yulon lose its eligibility for the season and being replaced by KKL in the playoffs? What will happen to the SBL after that? I don’t know. It remains to be seen.

Things like this happened over and over again this season. Actually the protest toward SBL officiating has been going on for years. A number of teams decided to boycott the games in the past. Those incidents resulted in a CTBA directive ruling that teams walking out of games will be fined NT$ 600,000, if my memory is correct, and their records for the season will be forfeited.