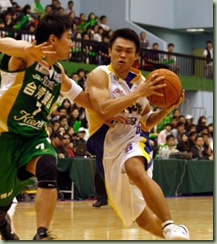 Yulon Luxgen beat Taiwan Beer 87-76 in overtime despite only suiting up eight players Saturday to stay on the top of the SBL standing. It is now 15-4, one game and 1 1/2 game ahead of second-place Dacin (15-6) and third-place Taiwan Beer (15-7).

Yulon was without Chen Hsin-an, Chen Chih-chung, Chou Shih-yuan and Lu Cheng-ju, who were all sidelined due to injuries. Yulon had a 12-0 run in the extra session to silence the Beermen.

In other games, Ouyang Ching-heng's season-high 34 points helped Taiwan Mobile to a 16-point win over Bank of Taiwan. The KKL-Dacin game was sloppy with both team combined for 59 fouls and 32 turnovers, leaving coaches from both sides complaining for the officiating after the game. KKL upset Dacin 79-75.