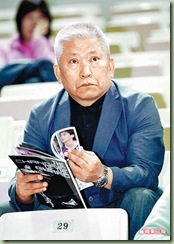 For the first time, Taiwan NT has to play in the East Asian zone qualifying games and earn a berth in the Asian Championship by finishing in the top two. It is not an easy task as Japan and South Korea are among the participating teams and Taiwan NT has only 10 days to train before the qualifiers opens in Nagoya, Japan.

Chung has arrived in Taipei and was seen courtside this week at the SBL games, observing player performances before deciding on Taiwan NT roster.

Replying questions from the media, Chung said it will not be easy (for Taiwan) to beat the Koreans but it's possible to make a run with Japan.

The veteran coach does not speak Mandarin nor Taiwanese, but he is familiar with Taiwanese basketball. Personally, I think Chung is a good candidate to help Taiwanese basketball go thru the down time that has been going on for about seven or eight years although his substitution and strategy had been questioned by many.

The 64-year-old Korean reached the peak of his coaching career in 1997, when he led South Korea to the 1997 Asian Championship title (beating China 86-72 in the semifinal and Japan 78-76 in the title game) and a seed in the 1998 World Championship.

He coached Dacin Tigers briefly in the defunct pro league CBA in 1999 before being named as an assistant to head coach Chien Yi-fei for the 1999 Asian Championship in Fukuoka, Japan. With Chung's help, Taiwan upset host Japan for a spot in the semifinal. Ironically, Taiwan never went back to Asia's top four after that year.